Here I will try to show examples of colors we have been blessed with here at the Small Haus. Perhaps I will borrow some photos from trusted friends' catteries as well. 😉
(This page will be built very slowly, as I have time to go through my thousands of cat pictures, and as we have more and more colors born here.)
For a more extensive list of colors, you can see MCBFA here.
For basic cat color genetics, you can see the concise Wikipedia page here.

So, without further ado, here is my very ultra basic cat color tutorial! (My sister is a geneticist so just, let’s all agree not to show her this page, ok? I’m sure I’ve mutilated many of the correct terms!)

Lesson #1
In short, there are only two basic cat colors.

Everything else is a modified version of these two colors!!
basic color #1. Red
​basic color #2. Brown/Black (depending on where you register your cat, it can be called either brown or black).​

​The “natural” pattern is tabby (also called “agouti”). There are multiple tabby patterns, but I love and work with mostly classic tabby. Unless otherwise noted, tabby cats here are classic tabbies.

Male cats get their basic color (the red or the brown) only from their mother. So a mother who is a patch tabby (see "Sunny", below) has both red and brown, and her sons could be either red or brown.
In contrast, female cats get their basic color from both parents. So females can be red, brown, or both! Note that only females* can be a mix of red and brown!
​(*Except in extremely rare cases with an abnormality. The odds are estimated to be only 1 in 10,000 males that are born tortoiseshell/patch tabby.)
Patch tabby: a female cat with the red AND brown - with a tabby pattern!
Tortoiseshell (or 'tortie' for short): a female cat with red AND brown, which is solid (i.e. no tabby pattern - see lesson #5)
Both patch tabbies and torties can have white, dilute, silver, or a combination of all three!
Here is a graph about tortie/patch inheritance. 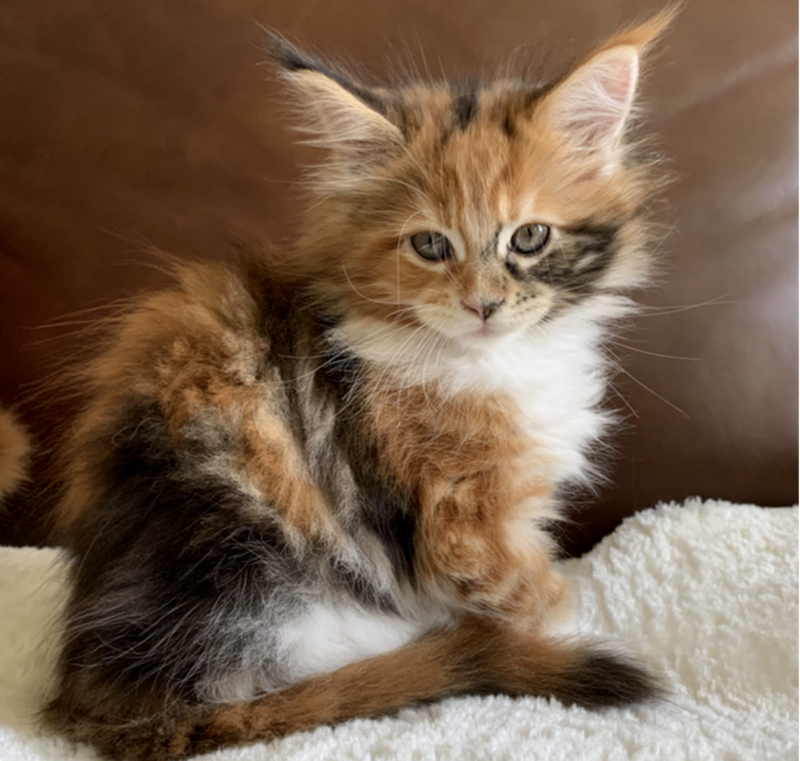 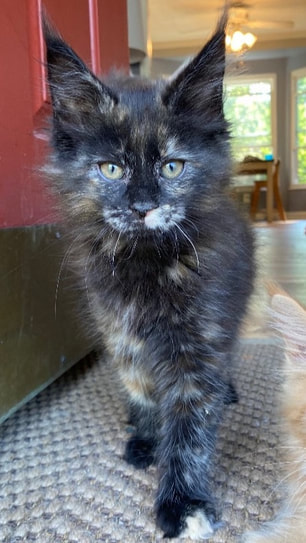 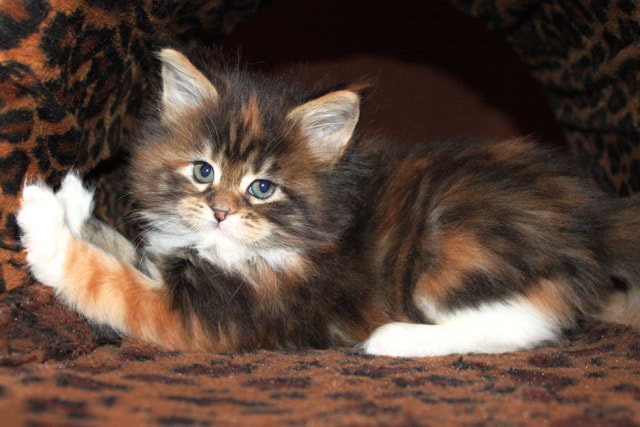 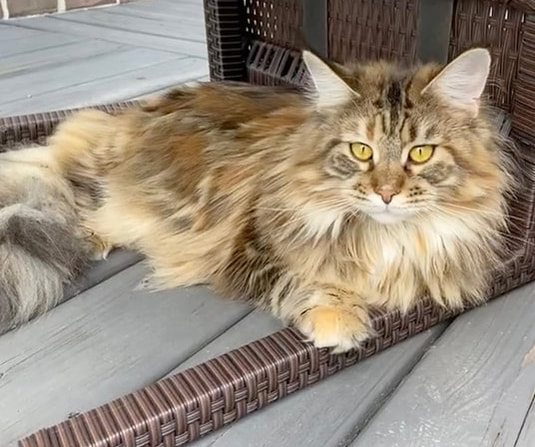 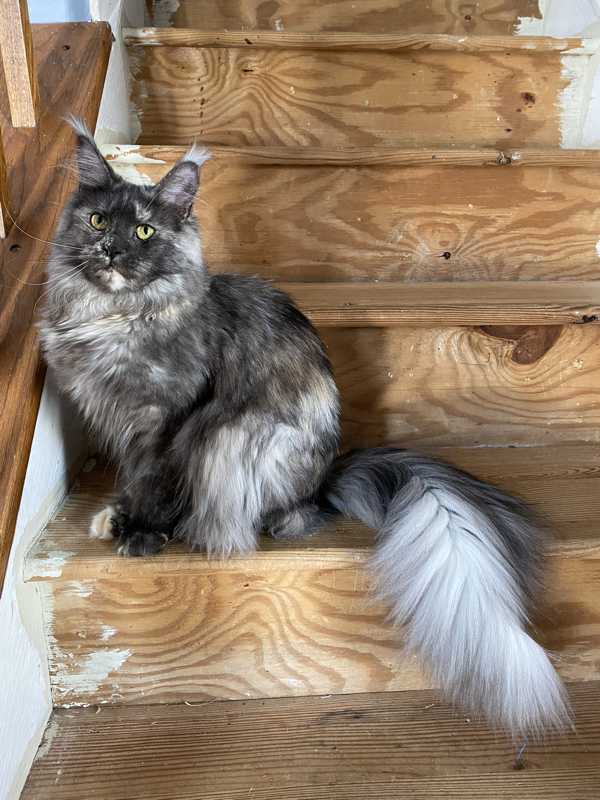 Any any any color can have white layered on top! It can be a tiny spot, or it can take over the entire coat! The white gene basically paints over the other color, and hides it! So it looks white but “underneath” is the real color, which you cannot see. Sneaky! The "with white" gene is a dominant gene, which means if one parent has it, approximately half of their kittens will inherit it.
I do not have high white here at the Small Haus, so my examples will be with pretty low amounts of white. Low white usually means socks, mittens, and a white bib!
"Sunny", (see above) is an impeccable Patch Tabby with White. If you add a LOT of white in big blobs around, you get a calico! See Elise, below (she is the only one we've had here).

Solid is a recessive gene, which removes the tabby markings! A recessive gene means both parents have to show it or carry it, so it is less common. When a cat gets the solid gene from both parents, it will turn the brown/black tabby into a solid black cat. A blue tabby becomes a solid blue. A patch tabby becomes a tortoiseshell. And here's the tricky one: a red tabby becomes... a red solid which still looks almost exactly like a red tabby. (See photo below, and check out the eyeliner and the lips for clues!). For weird reasons beyond the scope of my overview page here, the solid gene does not effect the red color much, so they still have tabby markings! 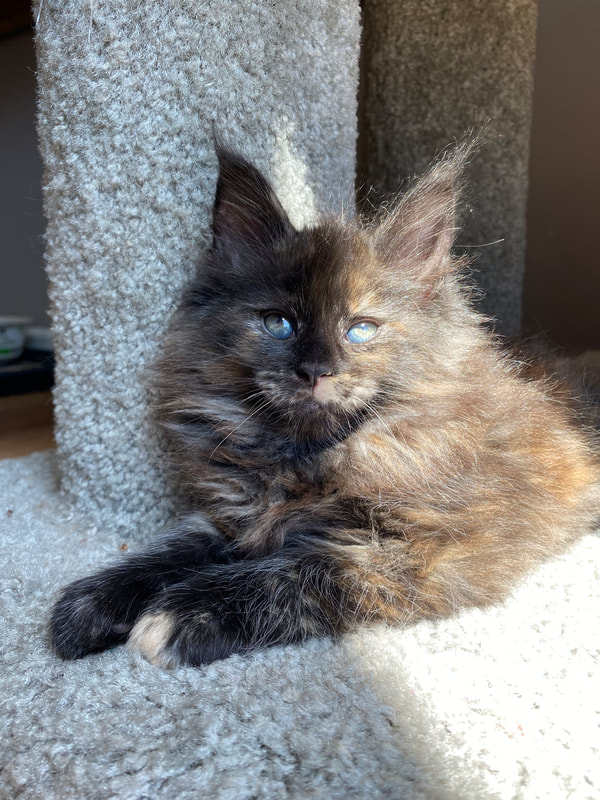 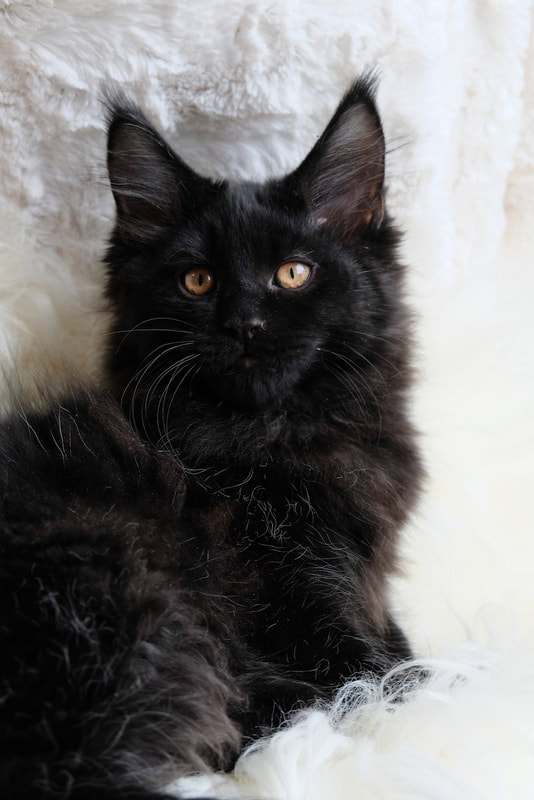 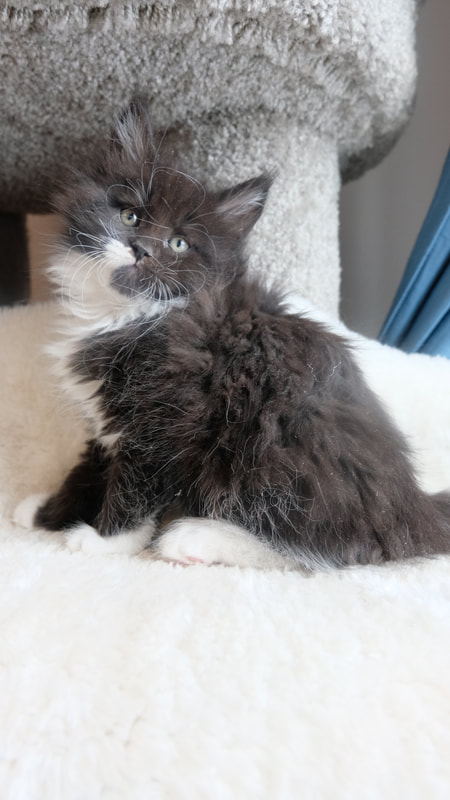 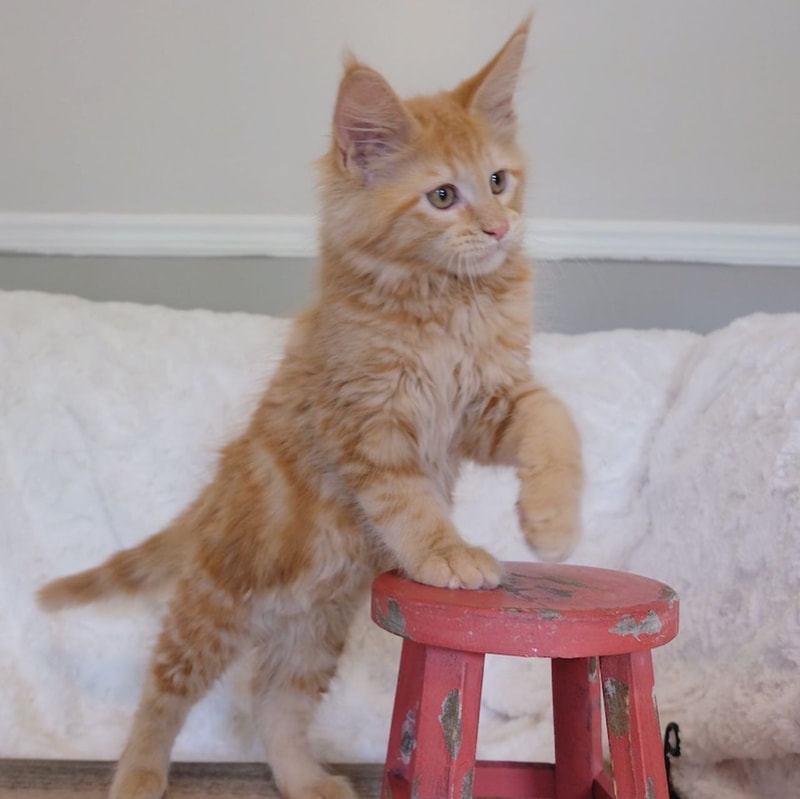 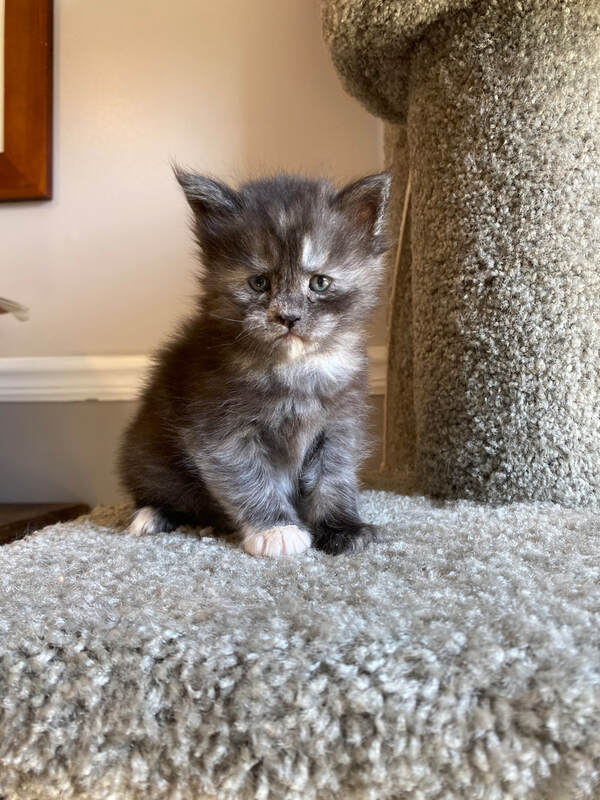 The silver gene is dominant, so if only one parent has it, approximately half of the kittens will inherit it.
​Basically, the silver gene does two main things.
1. The silver gene takes away the yellow from the coat color. That means it turns a brown tabby into a silver tabby. It turns a solid black cat into a black smoke. It turns a red tabby into a red silver, or "cameo" tabby. It turns a solid blue cat into a blue smoke. It's the removal of the yellow that makes the cat go from brown to silver, and the red go from brassy red to a softer red.
2. The silver gene causes the color in the hair to not be deposited at the base of the hair follicle! So if you pull the hair apart, the roots of the hair are... white! Examples below. This gives "silver" cats (which includes red cameo and smoke colors) the look of being lit from within, a bit of a glow. It's a fun effect! 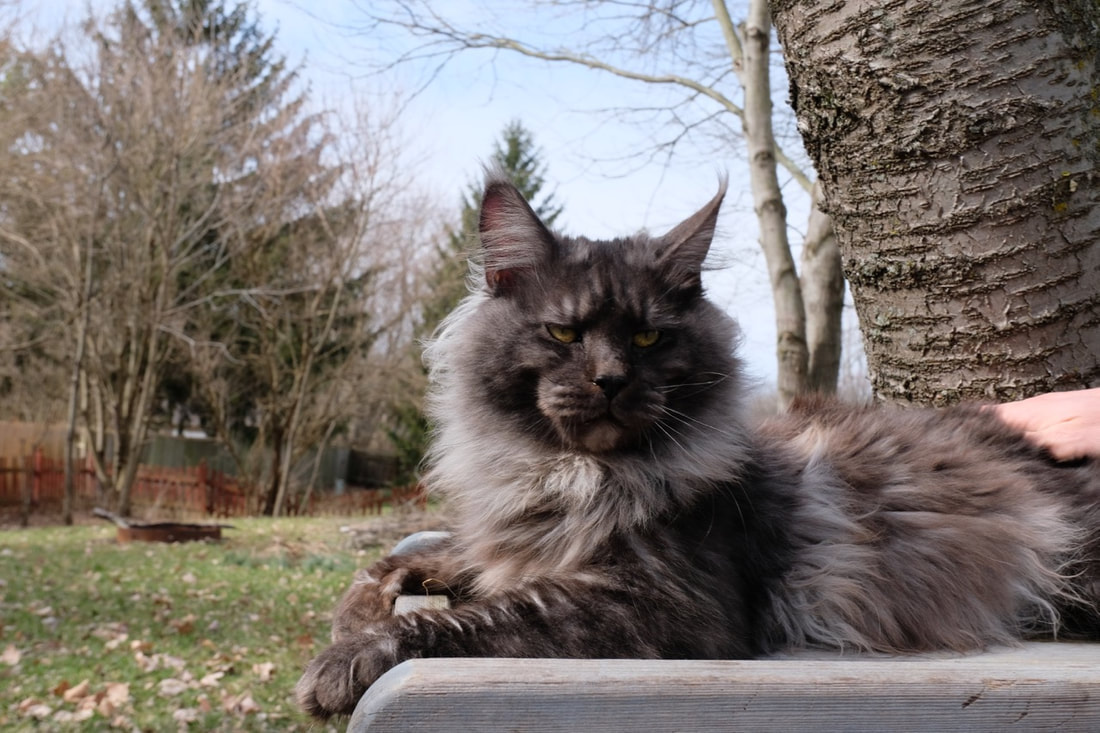 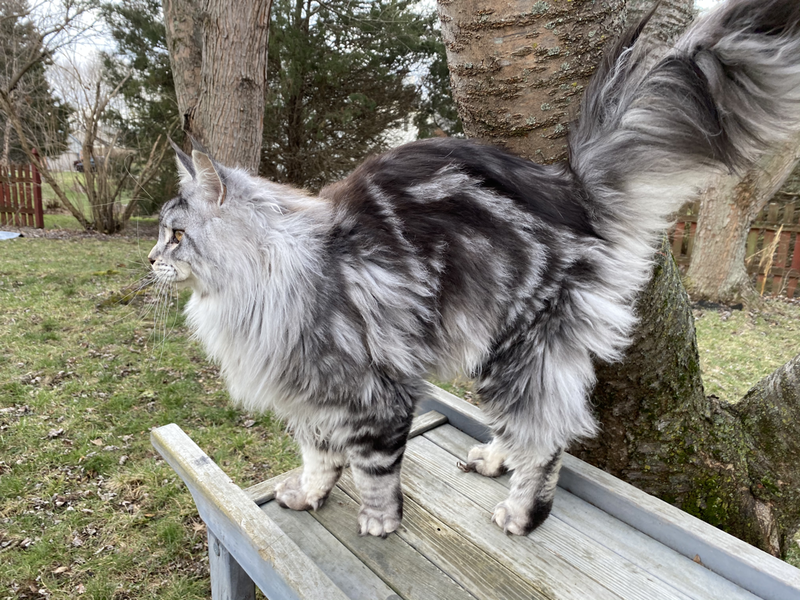 Tortie Smoke (solid, with no white) 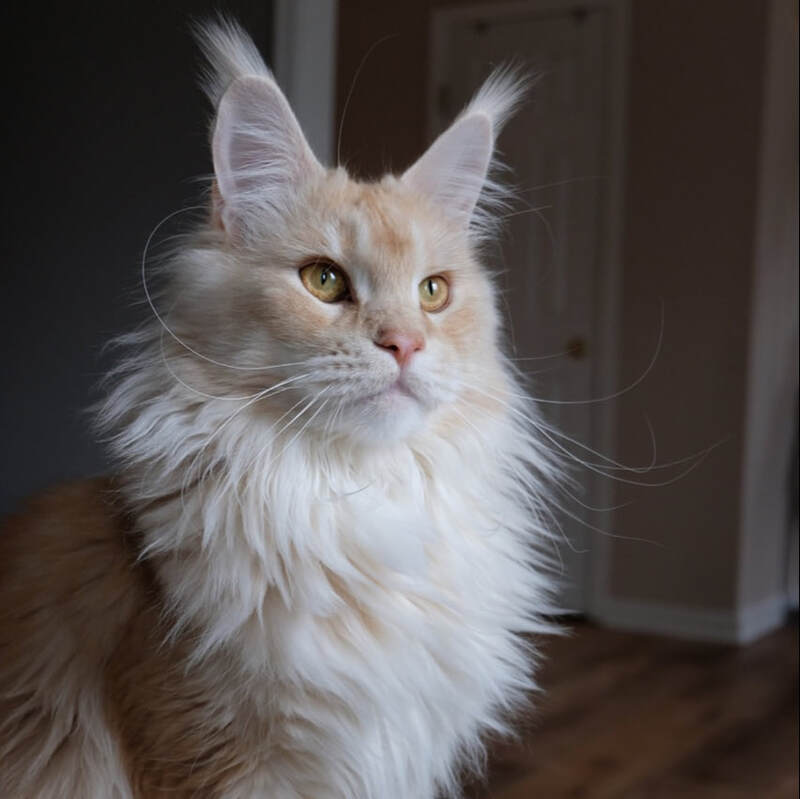 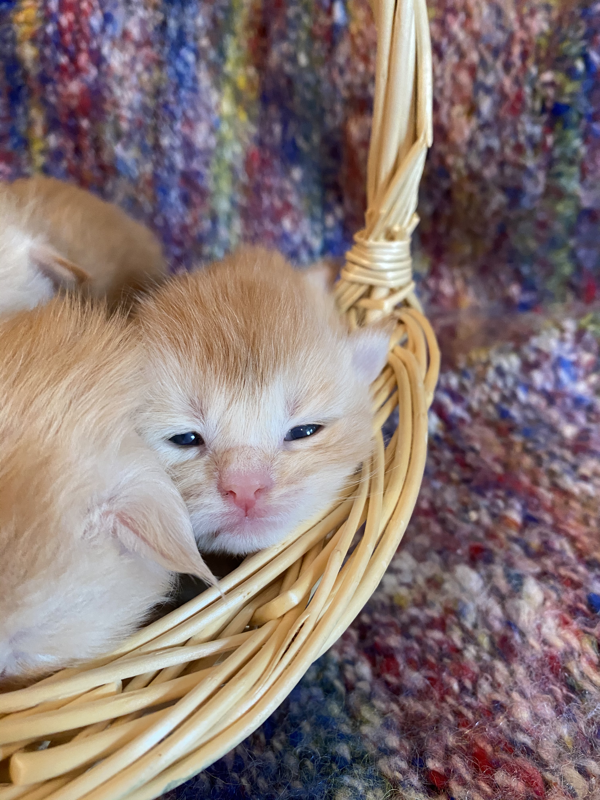 This is a quick one. In short: you can take either of the two base colors (reminder: that is either red or brown/black), and combine it with any of the main modifiers: with white, dilute, solid, or silver! So you can have a red silver with white, or a blue smoke without white, etc etc. So many possibilities! Here are some below. 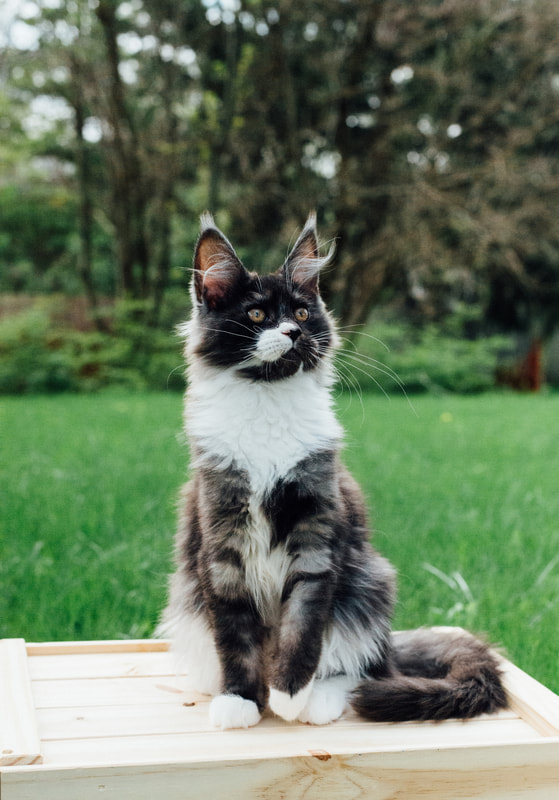 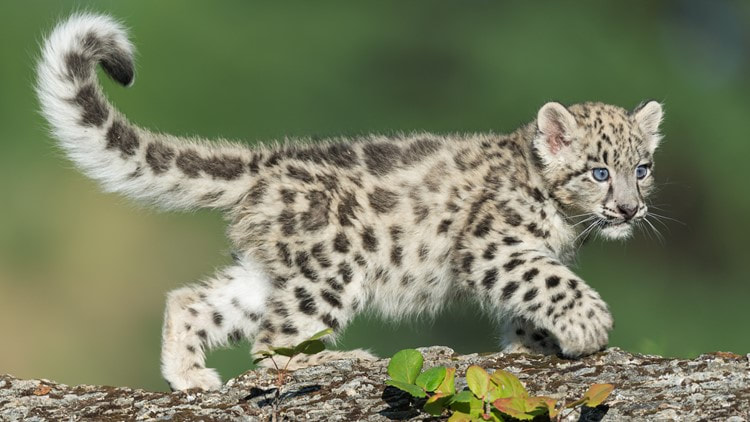 just checking to make sure you're paying attention! this is a snow leopard cub, not a Maine Coon ;-) 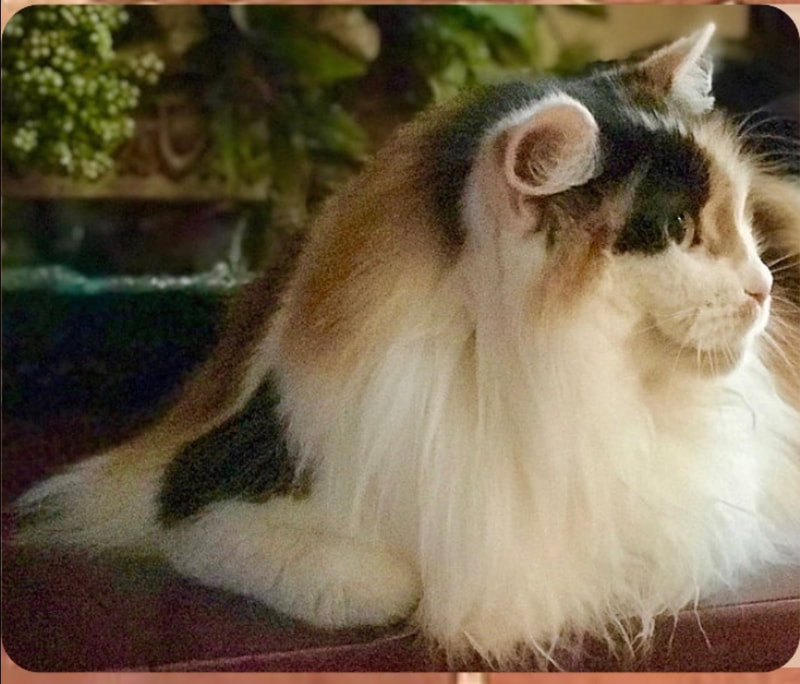 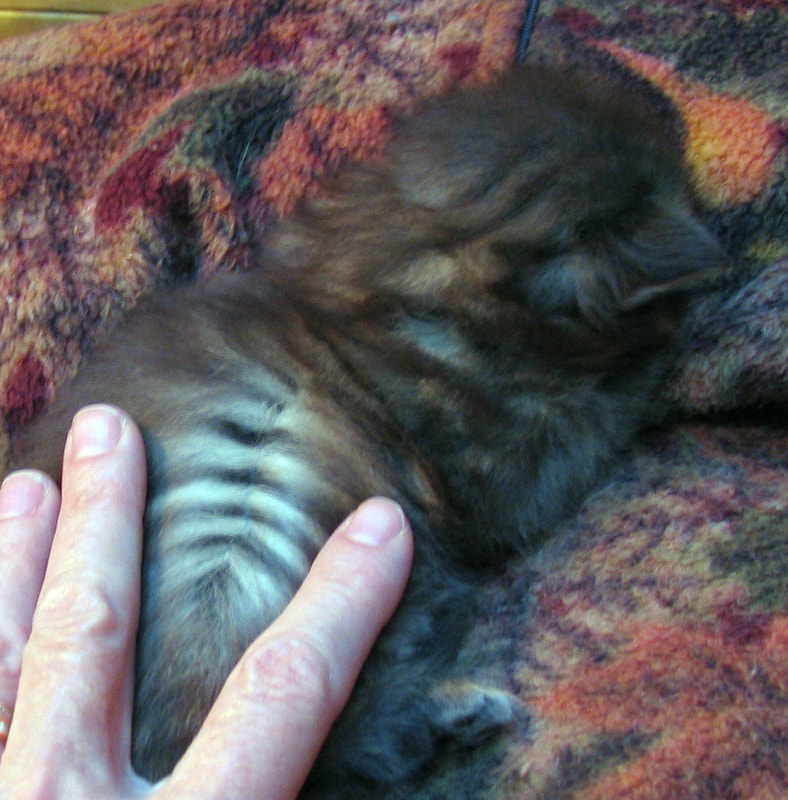 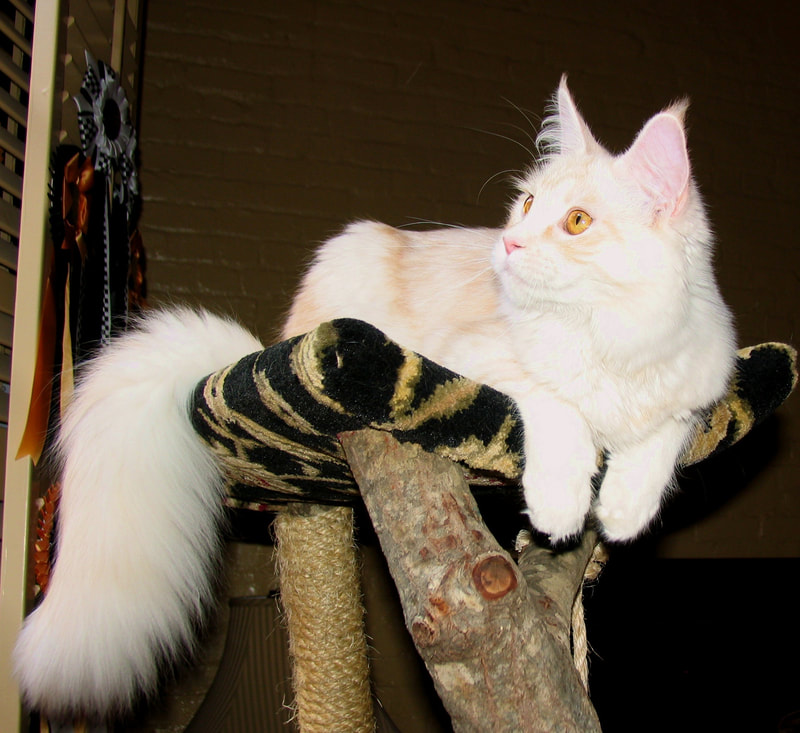 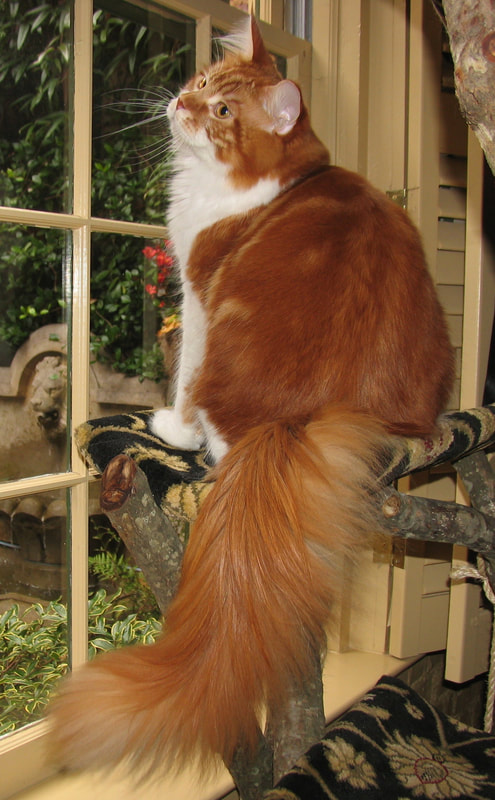 There are many patterns! I work almost exclusively with the classic tabby pattern, so I have solicited some examples from some trusted Maine Coon breeder friends.
First thing to know about tabby markings is this: all tabbies have the "M" on the forehead. It is a common myth that the "M" means Maine Coon. False!!
The most common patterns in the US are Classic and Mackerel tabby. Ticked tabby is more common in Europe.
Solid is not actually it's own pattern, but rather a gene that hides the tabby markings. You can often see tabby markings "ghosting" on a solid smoke cat.
Graphic below from Messy Beast page. 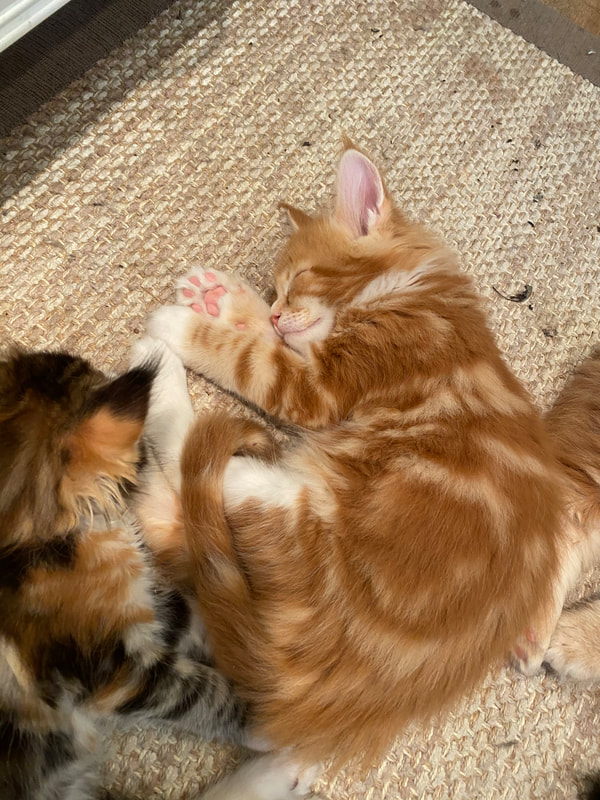 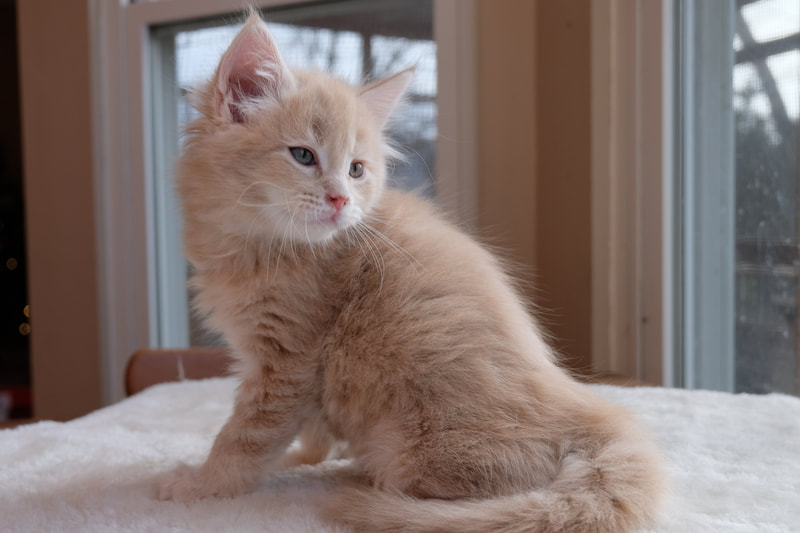 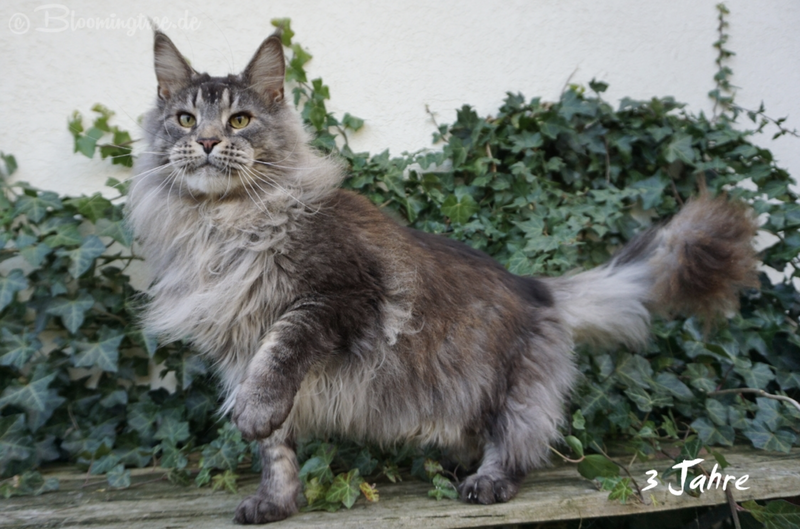 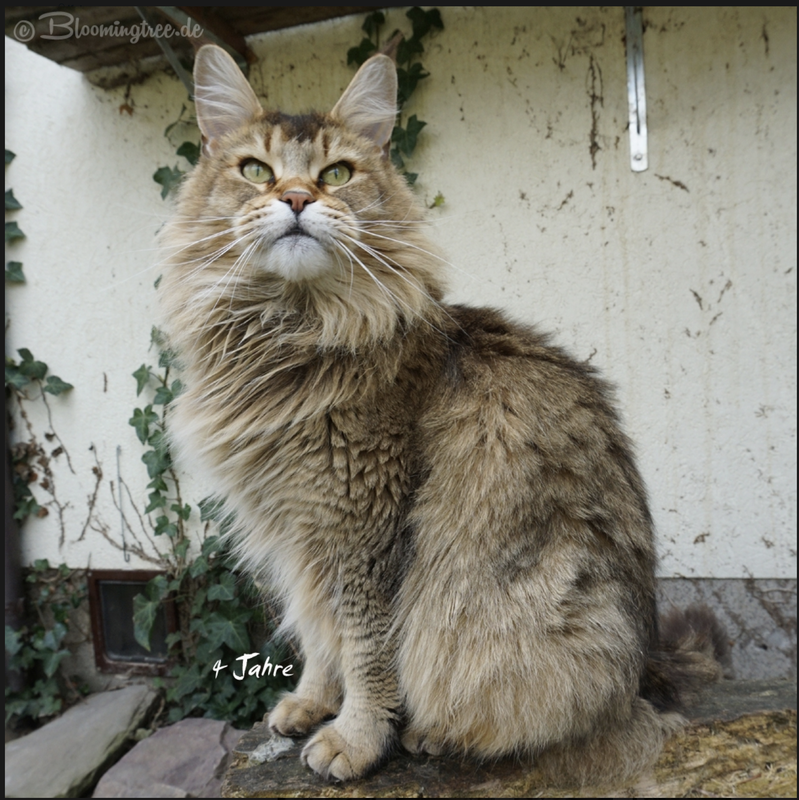 golden ticked from Bloomingtree in Germany

Here's the deal: I've never had an all white cat, and I don't know much about the genetics! You can easily google more info if you'd like. They can be blue eyed, odd eyed, or regular color eyed, and they are super stunning! Here are some photos from fellow breeders. 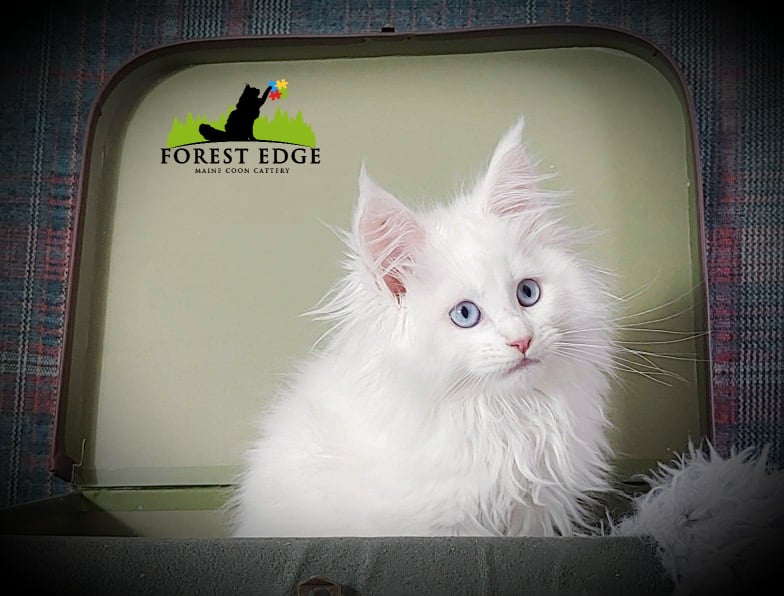 This isn't actually a lesson. It's just to inform you that my knowledge is very limited, and you can find lots more information online! Here are some helpful places to look for a "deep dive" into various color info.